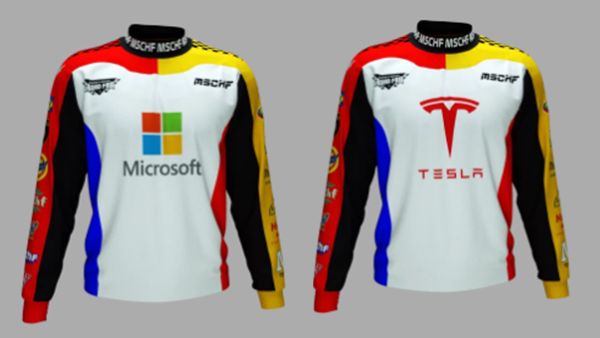 We’ve seen plenty of logo-based disputes over the past few years, with everyone from Kanye West to Apple arguing over supposedly similar symbols. It’s rare, however, to see a large corporation deliberately provoked – and even rarer to see eight provoked at once.

Enter MSCHF. The collective specializing in absurd and yes, mischievous product and design has revealed perhaps its most controversial “drop” yet, which sees it deliberately hijacking some of the best logos of all time. The team has targeted Coca-Cola, Walmart, Disney and more, and openly invites those inevitable cease-and-desist notices.

Title Cease and Desist Grand Prix, the “drop” allows users to purchase one of eight shirts that illegally use a major company’s logo. If your chosen company is the first to send MSCHF a cease and desist notice, you could win an exclusive MSCHF Grand Prize winner hat. It’s so simple.

The subversive shirts, clearly modeled after existing Grand Prix kits, feature the Disney, Microsoft, Tesla, Walmart, Amazon, Starbucks, Coca-Cola or Subway logo. The offensive design is slapped right in the middle of the shirt, for that “main sponsor” look.

The landing page is equally garish, one of the most cheeky examples of website design we’ve seen in a while. From the spinning shirts to the ticker banner declaring which companies have sent in a C&D (none at the time of writing), it’s all almost as compelling as watching live coverage of the race.

If there’s one group we can rely on to execute a trolling of these proportions, it’s the MSCHF. Previous drops have included Icon Rewind, which brought retro logos back to your iPhone, and the hottest video game of 2021: Chair Simulator. But these seem positively innocuous compared to the Cease and Desist Grand Prix. (We should probably take this opportunity to say that Creative Bloq does not condone such wrongdoing. Using logos illegally is very, uh, illegal.

But it looks like MSCHF isn’t just in it for the mischief this time around. A “manifesto” on the website tells brands: “You spend your days playing legal mole with harmless and unavoidable trademark infringement. We’ve made a different game for you! Your C&Ds are used to shut down indie creativity, but now you have the opportunity to use one to participate in a real creative endeavor. Get down to writing!” Indeed, if there’s one notable omission from the list of targeted brands here, it might be Apple – the company that recently sued a small business for using a pear as its logo.

It will certainly be curious to see which brand will end up biting first. In the meantime, why not check out our logo design guide, a resource that should help you create something completely original (read: C&D-proof).

shopee: filing of an FIR against an online shopping site, the company claims that it is of Singaporean origin