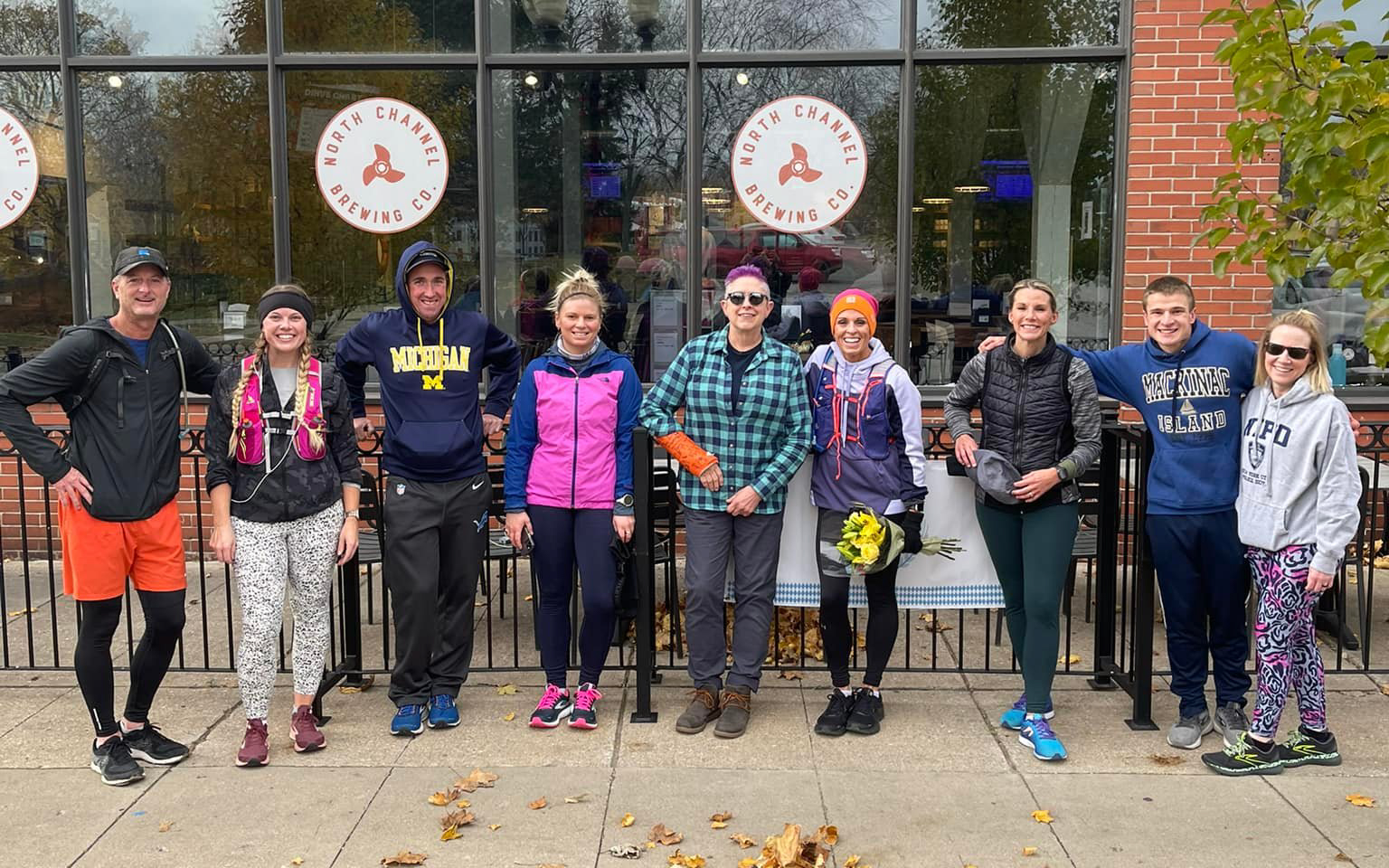 MANISTEE – A recently reformed club is looking to get Manistee residents out and relocate.

The Manistee Run Club was recently relaunched with the mantra “all are welcome, at any pace,” according to club president Dan Dean.

“We currently have around 20 speedsters for slow old guys like me and plenty in between,” Dean said in a club press release. “We are a mixture of permanent residents and relatively new transplants and our backgrounds are equally diverse.”

Dean said the club’s goal is “to have fun, share our love of running, get to know our neighbors and provide an avenue for those who just want to start running or veteran runners who want to go faster and Longer”.

The club recently announced its relaunch, with a new website and logo, after forming an advisory board of five Manistee area residents.

The club was first started in 2019 by Manistee Beverage Co. co-owner James Beaudrie to share his love of racing with the community and help promote the Run the Pier 5K, sponsored by NOMI Racing , which he also co-owns. . The annual race held in August draws hundreds of people to Manistee for a sunset road race which includes a run over the Manistee North Pierhead Lighthouse.

Beaudrie is now secretary of the revived club and said he was excited to see where it would lead, according to the statement.

Helping people get into running is a key aspect of the club.

“We’ve all had help getting started, and sharing our knowledge and experience with others who want to do the same is one way to give back to the community,” Dean said.

In April Dean celebrated his 60th birthday by running 10k a day for six days for charity. The money raised went to the Lakeshore Children’s Advocacy Center in Manistee.

Dean, who runs three to five days a week, says if he can do it, anyone can.

“I started by walking our new family pup to the bus stop with the kids. He then expanded to walk around the whole neighborhood,” he said.

Dean told the News Advocate he had been a sedentary office worker for 24 years and weighed a maximum of 215 pounds.

The big change came when Dean took his 78-year-old mom out for a 5k run through downtown Detroit.

“I drove her to the race. It was the same morning as the Detroit Free Press Marathon and we watched the start…it was the first marathon I had ever attended; it was so exciting and I knew then I wanted to run a marathon,” Dean said.

His mother, Carol Dean, was part of a group called Hope Water International, a faith-based group that raises money for clean water wells in Africa.

“I signed up to run the 2014 Detroit Free Press International Half Marathon. In April at the band’s launch event, I could barely run 10 minutes,” Dean said. “But they came up with a plan. training and followed it to a ‘T’, on weekdays by myself and with the band on weekends.”

On race day in October, Dean completed the 13.1 mile race.

“We really want to be able to do the same thing here at Manistee for anyone looking to run their very first race, whether it’s a 5k or a marathon,” Dean said.

Dean told the News Advocate it wasn’t hard to join the club and start racing.

“The most important thing is convincing yourself that you have to go do it,” Dean said. “Running is quite simple; you get a decent pair of shoes and you can go for a run. That’s the beauty of it.

Although a variety of free training plans are available online, Dean says the key is “having a group to help you through the process.”

“The first thing to do if you ever want to start running is to sign up for a race,” he told the News Advocate. “The next thing to do is join a band because you’ll find the hardest part is showing up… But if you do, you’ll never regret it, because it feels so good afterwards.”

Running is a key part of the running community, but you don’t have to be fast to run, said Manistee Run Club race director Denny Capling.

“Running is about having fun and challenging yourself wherever you are on your running journey,” she said in a statement.

As the club’s race director, Capling suggests monthly local races that club members can sign up for and participate in as a group.

Manistee Run Club Treasurer Jason Connell competed in this year’s Boston Marathon – the world’s oldest continuously running marathon and one of the most iconic.

“Boston is an experience you should all have if you like running,” Connell told club members on his private Facebook page. “It’s an experience like no other.”

Connell started running as a kid growing up in Indiana. Weekly children’s races organized by the local running club fueled his love of running. His advice to new runners is, “how you compare to others and where you start from doesn’t matter.”

“If you start running, you will improve and you will probably surprise yourself,” he said.

Running may be in the name of the club, but it’s just as important to develop friendships with others dedicated to this common goal.

“We want to be welcoming to all and provide a platform where neighbors in the Manistee community, whether full-time residents or visitors, can feel safe and welcomed,” said Christine Rogers, Social Director of the club. “We like to stay after shopping, either in a restaurant or on one of the beaches to chat and share a drink.”

The club is an entirely volunteer-run organization and is free to join, but has incurred expenses from its new website, plus the one-time cost of logo design.

“We would like to purchase a flag and some banners to make us more visible when we meet in the community to run,” Connell said. “We will therefore at some point provide a means of collecting donations to help defray club expenses,” he said.

The Manistee Run Club welcomes new members to “show up and join in the fun,” according to the press release.

The schedule will change as the weather warms, with more weekday races added. Visit the club’s website for current meet times and locations, upcoming races and more at manisteerunclub.com. The club is also active on Instagram and has a private Facebook page.

Slap the Rocks on Xbox, PlayStation and Nintendo Switch