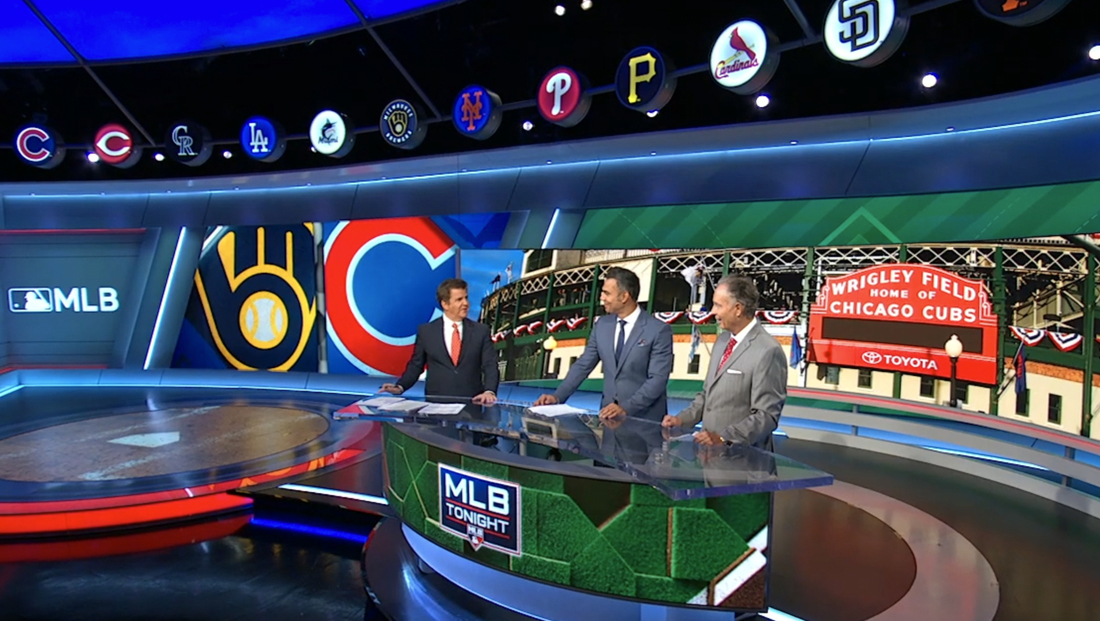 MLB Network has lined up high-tech studio upgrades for viewers for the delayed opening day of Major League Baseball’s 2022 season.

The network worked with Clickspring Design to update several Studio 3 sites at its broadcast facility in Secaucus, New Jersey.

“While Studio 3 has always been MLB Network’s flagship, we wanted to create a dynamic area to allow for convenient breakdowns and more interactivity,” said Susan Stone, SVP, Operations and Engineering at MLB Network.

“Without a doubt, it was a huge improvement in case of technology in Studio 3,” said Murat Ustuner from Clickspring. The team worked with integrator Grant AV to bring the millions of LED pixels to life with Avid Maestro providing video wall control.

Rendering of the Studio 3 design.

The curved motif continued throughout the renovated space with expansive walls and dramatic arched header elements, some of them existing and others manufactured by Dimensional Worldwide.

The space above the set also features a ring of team logo elements, a feature that remains from the original Studio 3 design.

Behind the main anchor desk location, Clickspring also created a free-standing 30×11ft curved LED video wall using 1.9mm SemiLumen tiles backed by a softbox. This layering allows the network to take advantage of both hardscapes and video panels to create a look that has the benefits of a dynamic video wall but with depth and structure.

The camera to the left of this area is a new seamless video wall with 1.8mm SemiLumen tiles framed by two diagonal strips with integrated lighting accents.

The wall continues to curve gently further towards the north wall of the studio before meeting a point where it intersects with an additional new wall whose flat design is a strategic extension of an existing stage tower.

Just before the two walls meet is a prominent dimensional MLB logo.

“Adding a curved LED wall and round LED floor space allows us to be more nimble, more creative, and ultimately serve our fans better,” Stone said.

This allows the area to be used for a variety of purposes, including a demonstration area, where the LED on the floor can present an image of the home plate while dynamic images are displayed on the video wall. The floor can also feature show or team branding and be used as a more informal anchoring area.

Ultimately, Studio 3 is a multipurpose space, so Clickspring had to take that into account when designing the modifications.

“What’s tricky about this space is that there are three other sets with common elements to our new area, such as scenic columns, a ring of team logos, and a header of sky lightboxes. “said Emmett Aiello of Clickspring.

“We had to design a set that would fit visually into this context, even though wide shots don’t tend to capture the sum total of all four parts,” Aiello continued.

“We tried to keep it simple and bold and not too busy. The only real nod to a baseball diamond is the demo area where the LED on the ground can showcase home plate or the pitcher’s mound,” Aiello explained.

Clickspring’s floor plan of the space shows how the set connects to existing venues.

The overall lighting design for the new area was handled by Eastern Lighting Design.

The MLB Network broadcasts from the same facility that MSNBC and NBC News used until 2007 and has called it home since its launch in 2009.