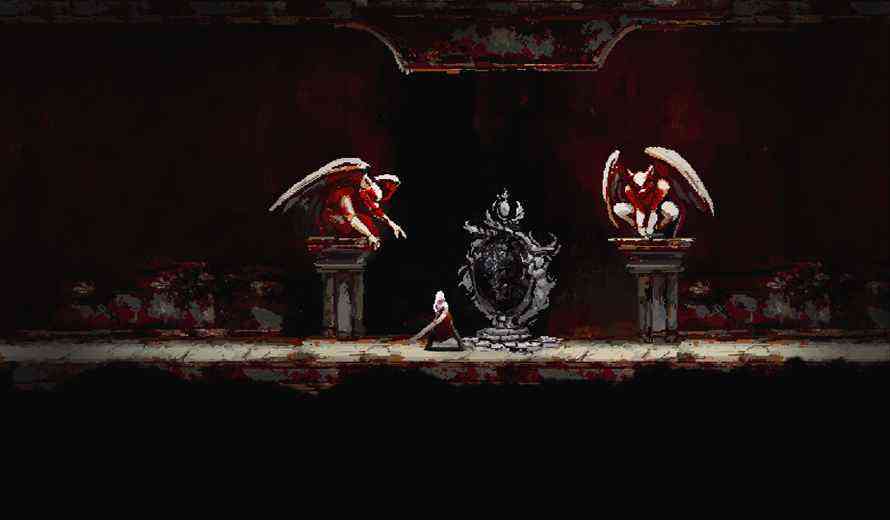 Pixel art action platformers with a gothic aesthetic aren’t exactly new. They’ve been around since, well, the original Castlevania. Lately, the Metroidvania genre has been crossed over with Dark Souls. This makes sense, since Dark Souls has, at its beating heart, many mechanics borrowed from Metroidvania games. Moonscars is an upcoming 2D action title that checks all the usual boxes, but goes a step further to add some ideas of its own.

If opaque storytelling is a sign of a good Dark Souls impersonator, then Moonscars is amazing. While I can’t even begin to explain the story – I just played a short demo, after all – I know that the narrative is woven into the game’s mechanics. You play as Irma, a Clayborn, who was created in the Moonforsaken workshop, where you will eventually return. Irma feeds vampirically by killing things and absorbing their Ichor. Ichor powers healing, spells, and special abilities. Bone meal is the in-game currency.

The combat is very Soulslike, and that’s a good thing. Irma has light and heavy attacks, dodges and parries. She can also learn effective moves, essentially weapon arts in Dark Souls parlance. Eventually, she finds her way back to the workshop, where she can get a new mould. They look a bit like the seashells in Mortal Shell. The different molds come with special buffs and a secondary weapon.

Fast travel comes in the form of dark mirrors. But there is a cost. When Irma uses a mirror for the first time, she sacrifices her mold and all of her loot. A mirror version of herself appears on the spot – Elden Ring fans, consider Mimic Tear – and she must defeat it to regain her belongings. Just like with Dark Souls and its ilk, death means losing bone meal and a desperate race to get it back.

The world of Moonscars isn’t exactly open, but the map offers a fair amount of freedom to explore, with unlockable shortcuts and the occasional need to backtrack. Moonscars looks suitably dark and brooding. He has a painterly artistic style that is rich and suggests depth. While the atmosphere is dark, there are sometimes moments of levity, or at least a little levity. A Cheshire Cat-like figure pops up occasionally to offer advice and a bit of exposure.

In the short demo, there was no final boss and a fairly limited number of enemy types, so I can’t get close to the full experience. But even in the brief installment of Moonscars gameplay, some things stood out. First off, the combat and animations are engaging and will really scratch the Dark Souls itch. Second, there are a lot of in-game systems that fuel the action and make it interesting and flexible. Finally, the game looks awesome. It’s certainly not a totally unique aesthetic, but it has the potential to match games like Vigil: The Longest Night, Dead Cells, Unsighted or Blasphemous. I didn’t fully understand the story, but the combat is somewhere between fun challenge and frustrating impossibility. I’m glad to see it develop.