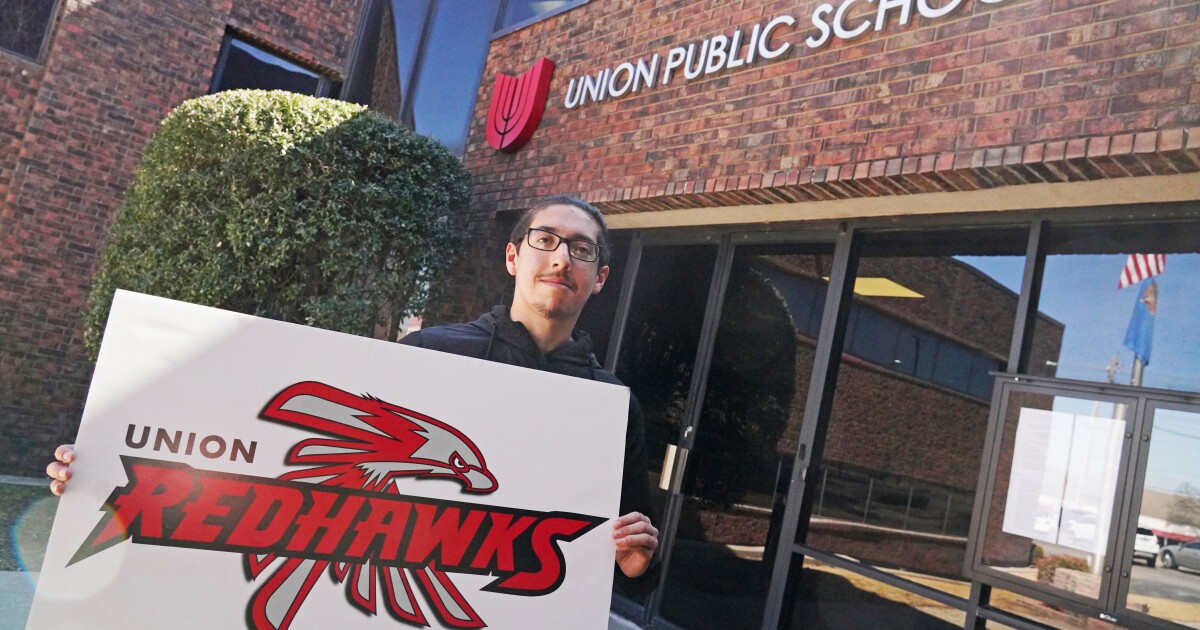 TULSA, Okla. — It’s official: the final version of the Union Redhawks logo has been approved by the students and the district school board.

The student body voted in favor of the logo with 72% approval. The board then unanimously approved the student-created design that made it the official logo for the district’s new mascot.

It comes after a 14-month process to find a new mascot for Union Public Schools.

RELATED: Union Public Schools is looking for a new mascot

“I’m really proud of the work that has been done to take us in this new direction as Union Redhawks,” Superintendent Dr. Kirt Hartzler said. “This stellar design – by one of our own students – will see us soar into the future with a mascot we can all be proud of.”

Dr. Hartzler goes on to say that the new logo design does a great job of “capturing Union’s fierce spirit while striving for excellence.”

The winning design came from Union High School junior Caiden Morales, who grew up and attended UPS throughout his school career. Morales is largely a self-taught artist.

“What made me think about the design was really my dad,” Morales said. “He encouraged me to do some drawings by myself and submit them because he wanted the school to have a cool mascot logo”

Morales says he has been drawing since he was a child. He grew up using pencil and paper drawings until he got an iPad about two years ago.

“I was the kid who always draws all over his homework at school,” Morales says. “The iPad has opened up a lot of unique opportunities for me. It allows me to paint digitally. I draw pictures which I find cool and I also love animation, being able to bring things to life.”

It was Morales’ hosting work that initially caught the district’s attention, according to Union communications director Chris Payne.

“When Caiden sent me an animation he had created, I was totally blown away. His concept captured the ferocity we were looking for in a new mascot,” Payne explains.

Morales is surprised at how things turned out since he hadn’t originally planned to submit a design. He “just wanted to draw something cool” but didn’t expect the district to actually use it. Ultimately, this is now the new logo design for the entire school district.

Morales thinks graphic design might be something he wants to pursue as a career in the future.

“It feels great. It’s a big accomplishment in my life that I didn’t really expect. To say it’s going to be everywhere. It’s going to be on t-shirts. It might even be put on a school building,” says Morals. “To say that I could be 50 or 40 one day and I will look back and my logo will always be here on a school building. No matter what, I want it to be a true representation of the Union, a performance that people will be really proud of.

Stay connected with us anytime, anywhere —

Why work with an SEO strategist for your website