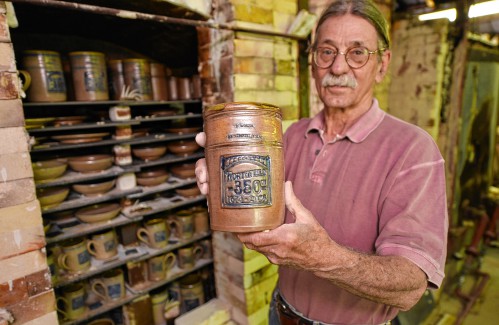 NORTHFIELD – Potter Tom White removed dozens of freshly baked commemorative items for Northfield’s 350th birthday from the oven at his studio in Winchester Road on a recent Monday morning.

Joining him for the reveal was Stacy Bond, chair of the 350th anniversary committee, and Joan Stoia, a member of the committee’s fundraising arm. According to a press release from Stoia, each piece of decorated New England blue sandstone bearing the anniversary logo is hand-stamped, signed, and just a little different from the others, just as they would have been at the end of the years. 1700.

White, who is familiar with 17th and 18th century pottery, began work on the design of the Northfield pieces in January, after Bond approached him based on a similar project he had done for the Whately birthday.

“I liked the idea of ​​collaborating with someone who has been in the community for over 40 years and is well known for his craft,” Bond said in the statement.

“The moment I pressed the mold I made from the logo into the clay, I knew the pieces would have the historic feel I was aiming for,” White shared in the release.

To produce the numbers needed for a first run, White had help from Pearson Franz, a junior at Four Rivers Charter Public School in Greenfield and daughter of Greenfield Recorder photographer Paul Franz, who spent a week internship at the studio in applying cobalt blue. glaze over the embossed logo medallions which White would later apply to the surface of each piece. The pots were dried and glazed in May.

White then introduced salt to the kiln in the same manner as early American potters before him. According to White, the salt turns to vapor and is carried through the pots by the flames, creating a glass-like coating. This process is responsible for the variations on the surfaces that make each pot unique.

“High-temperature glazing ensures that traditional stoneware is impermeable to liquids,” he explained in the release. “Unlike earthenware pieces, you can put a stoneware mug filled with hot or cold beverages on a table and never leave a ringing sound.”

Additionally, White said, once fired this way, the pieces never disintegrate, which has helped archaeologists who find fragments understand cultures dating back 1,000 years or more.

Bond said she hoped to see the pottery and all anniversary items – including bags, hats and other items bearing the distinctive logo – go on sale in the summer of 2022 to build excitement before the anniversary year. Over 50 residents entered a contest to win one of four original commemorative items produced for consideration by the 350th Anniversary Committee. The four winners were Ed Bundas, Jenny Tufts, Robert Lauwers and Bruce Kaeppel, all from Northfield.