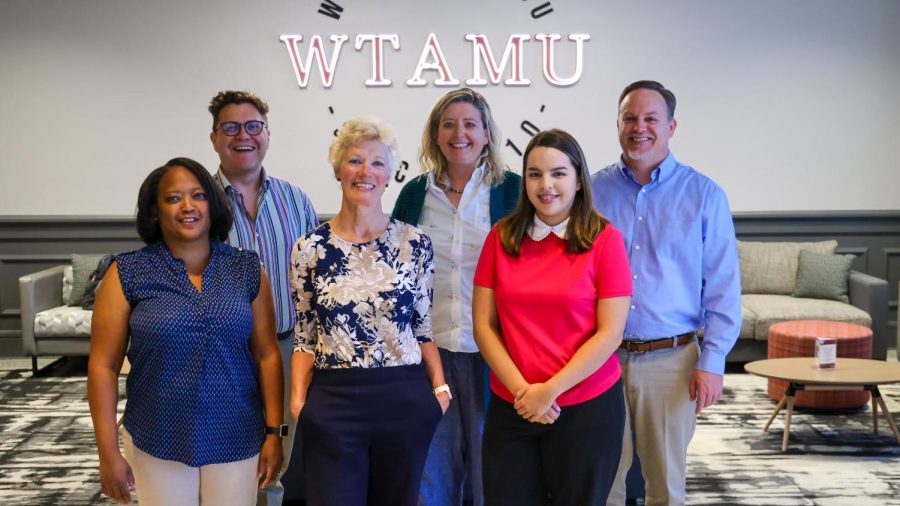 WT won two silver medals at the Collegiate Advertising Awards for its campaign touting the historic $125 million global fundraising campaign – one for the campaign itself and one for the logo design.

Graphic designer Dwanya Pierce won a bronze medal for her work on a folded brochure for The Arts at WT subscription series for the Sybil B. Harrington College of Fine Arts and Humanities.

Submissions were reviewed by a national panel of industry experts, with a possible 100 points overall. WT entries competed against organizations of similar size in their specific groups and categories.

Awards were given to entries that received the highest marks from the judges, placing them in the top 16% countries for excellence in advertising. Judging criteria included creativity, layout and design, functionality, message effectiveness, production quality, and overall appeal.

“I am very proud of my team for winning these national awards. It’s a fantastic achievement,” said Kelly Carper Polden, assistant vice president for communications and marketing. “Our One West campaign awards are an affirmation of the team’s creativity and vision that bring the entire campaign to life and tell the story and aspirations of Panhandle’s University. And the fact that our two graphic designers have won awards for individual design projects illustrates their talent and creativity. It’s inspiring to work with a team where everyone has a common goal: to promote WT.

“The awards recognize outstanding leadership and creative teamwork within the University’s communications and marketing division,” said Dr. Todd Rasberry, Vice President of Philanthropy and External Relations. “Advancing WT’s excellent brand on behalf of students, faculty, staff, alumni, and communities in this region, especially at this national level, is essential as a Panhandle University.”

One West feeds into the vision of the University’s long-term plan, WT 125: From begging to the world.

This plan is fueled by the historic amount of $125 million one west huge fundraising campaign. To date, the five-year campaign — which launched publicly on September 23 — has raised around $110 million.

WT is located in Canyon, Texas on a 342-acre residential campus. Founded in 1910, the university has been part of the Texas A&M University System since 1990. WT, an institution serving Hispanics since 2016, has approximately 10,000 enrollment and offers 59 undergraduate programs and more than 40 graduate degrees, including two doctorates. . The university is also home to the Panhandle-Plains Historical Museum, the largest history museum in the state and one of the finest art collections in the Southwest. The Buffaloes are members of the NCAA Division II Lone Star Conference and offer 14 men’s and women’s athletic programs.

Shredder’s Revenge’ delivers a critical hit to your nostalgia